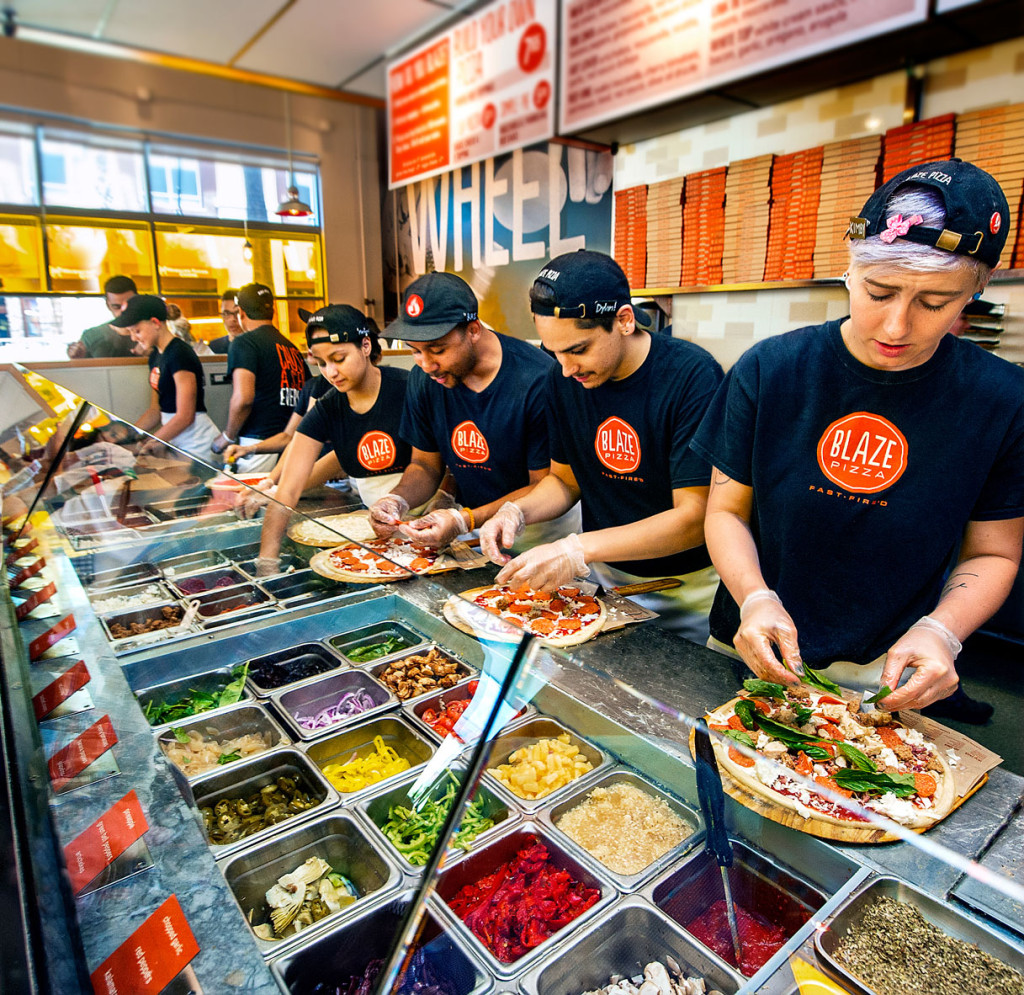 Blaze Pizza is a modern day “pizza joint” that has been inspiring excitement and cultivating fanatics for its custom-built artisanal pizzas, freshly made salads, blood orange lemonade and s’more pies since it opened its first location in 2012. Each restaurant features an interactive open-kitchen format that allows guests to customize one of the menu’s signature pizzas or create their own, choosing from a wide selection of carefully sourced, high-quality ingredients – all for around $8. The generously-sized 11” pizzas are then sent to a blazing hot open-flame oven – the centerpiece of the restaurant – where dedicated pizzasmiths ensure that the thin-crust pies are fast-fire’d and ready to eat in just 180 seconds. Each restaurant makes its own dough from scratch using a recipe developed by critically-acclaimed Executive Chef Bradford Kent (the “Pizza Whisperer”), which requires a 24-hour fermentation period to produce his signature light-as-air, crisp crust. For pizza fans with specific dietary needs, Blaze Pizza offers gluten-free dough and vegan cheese. The restaurants will also feature a selection of wine and craft beer.

To create the perfect vibe inside the new South Florida restaurants, award-winning design architect Ana Henton has added several unique, modern touches, including an oversized wall graphic custom-built to suit the spaces. Additionally, in support of the company’s commitment to “Intelligent Choices for Our Pizzas, People & Planet,” the restaurants will use both recycled and sustainable materials and energy-efficient LED lighting, and will feature eco-friendly, compostable packaging.

“At Blaze, we’re all about creating an engaging dining experience where guests can enjoy artisanal pizza that’s both fast and affordable,” said Jim Mizes, president & COO of Blaze Pizza. “The authenticity of our food, plus a service culture that genuinely focuses on the happiness of our guests and crew – have been key to our popularity and expansion.”

Blaze Pizza Franchise Partner Adam Cummis says he is looking forward to developing strong ties with community groups and creating a spot where guests can connect, create and enjoy. To that end, Blaze restaurants promote a turnkey fundraiser program that returns 20 percent of an event’s proceeds back to the organization, helping schools, sports clubs and other local groups “cause a scene for a good cause.”