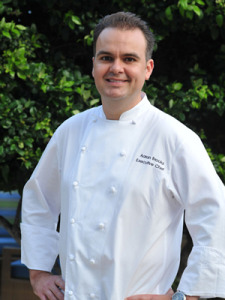 Chef Aaron Brooks will be representing Miami at this year’s Palm Beach Food and Wine Fest – pbfoodwinefest.com – during their STREET FOOD competition on Saturday, December 13th. He will be going head to head against Palm Beach’s Chef Clay Conley in the Fried Chicken category. Until then, let’s get to know Chef Aaron!

What made you decide to become a chef? What is your culinary background?

I learned to cook in Australia, my mother who was also a cook pushed me into the trade right as I finished High School. My Dad managed pubs back home so we were a true family of hospitality. It was only natural I would end up either behind the stoves or a bar.

How has being a part of Four Seasons influenced you as a chef?

Four Seasons has been so awesome to me. I originally landed on the doorsteps of the Four Seasons Vancouver as I attempted to backpack around the world. Once there I fell for the company and for my lovely wife (who also worked for Four Seasons). So not only has Four Seasons sent me on a culinary journey around North America it has also had a great influence on my home life!

Where do you find your inspiration in the kitchen?

I like to work from the cooler. Just go in there and look around at what we have then go from there. Talking to my guys also helps a lot. Miami is a melting pot of Latin and Caribbean cultures, I like to hear stories of different cultures and pull from that adding my touch too.

What is your current food & drink crush?

Cooking over fire. Meat, fish, veggies, you name it. Any chance I get to cook over wood and charcoal I jump at the chance. It really elevates the flavor and takes what your cooking to new levels.

As for drink… a good old fashioned never gets old… so to speak.

Any advice for local aspiring chefs?

Rome wasn’t built in a day. Work hard and have a great attitude… even in the toughest of times. The kitchen gets hot but you need to stay positive and soldier on. I have worked in kitchens over 18 years and I wouldn’t trade it for anything else. You meet some great people and get to share amazing experiences. I am lucky to get paid to do what I love for a living.